Sir Oliver Heald MP, Peter Lilley MP and Stephen McPartland MP met with the Lister Hospital’s Chief Executive and Chairman in Parliament. The meeting was to discuss progress on the campaigns for specialised surgical services and a satellite Radiotherapy Unit to be based in Stevenage at the Lister Hospital.

Stephen McPartland, Member of Parliament for Stevenage, said, "It was a fantastic meeting and I am delighted that business cases for both campaigns are now completed and will be considered shortly by NHS England and the Board of the East & North Herts Hospital Trust, which manages the Lister Hospital."

Peter Lilley, Member of Parliament for Hitchin & Harpenden, said, "It was great news that the Trust is making progress on bringing both a radiotherapy unit and vascular surgery services to the Lister.  These could transform the lives of patients in my constituency."

Sir Oliver Heald, Member of Parliament for North East Hertfordshire, added, "North East Herts residents have had to travel long distances to access radiotherapy and specialist artery surgery. They have strongly supported our campaign to bring these to the Lister and I was encouraged by the progress being made by the Trust. I will continue to press for action."

If successful, Specialised Vascular Surgical Services will be located at the Lister Hospital instead of Watford. A satellite Radiotherapy Unit based locally would mean thousands of local people would no longer have to travel to Mount Vernon in Hillingdon for routine Radiotherapy Treatment. A campaign the three local Members of Parliament launched together to help bring cancer Services closer to patients’ homes. 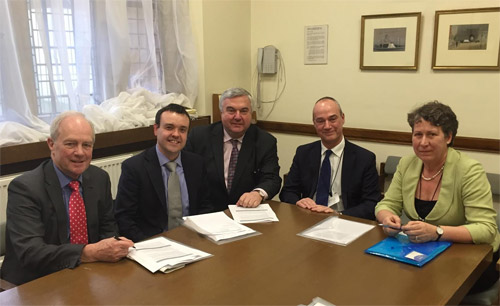