The Treasury analysis of the cost of leaving the EU, on which the Prime Minister bases his claim that leaving will “trash the economy”, is “fatally flawed because it relies on indefensible assumptions and statistical manipulation” according to Peter Lilley MP.  This reinforces the devastating critique of the Treasury’s abuse of economic models published by Professor Blake*1 and destroys the foundation on which George Osborne’s bogus budget is based.

“The effect of these indefensible errors is to exaggerate the impact of leaving on our trade with the EU by a factor of between 3 and 10 – even if their basic model is correct,” Peter Lilley said. “At the same time, as has already been pointed out by independent observers, the Treasury arbitrarily fed into their analysis the assumption that all the potential benefits of leaving are zero*2 .  So they grossly overstated the costs and ignored the benefits. A more objective analysis – even based on the Treasury model which has been seriously criticised – would very probably show that the benefits of Brexit exceed any costs.”

The statistical flaws identified by Peter Lilley were embedded in statistical appendices to the 200-page document entitled HM Treasury Analysis: the Long Term Impact of EU Membership and the Alternatives which the Treasury published to give credence to claims that the economy would grow by 5% to 9% less by 2030 if the UK leaves the EU and trades on WTO terms.

Although the errors were well hidden in the document, once unearthed they are simple enough for anyone to understand. In brief:

For all those reasons the study seriously exaggerates the potential costs of leaving – probably three to ten-fold.

The errors exposed by Peter Lilley reinforce the devastating critique of the Treasury models published by Professor Blake.

“These errors fatally invalidate the government’s case that leaving the UK would lead to significantly slower growth. But, as a former Treasury Minister I am sad to say that they also undermine the reputation of the Treasury for impartiality and statistical competence.”  Peter Lilley added. “After the referendum campaign it will be important for Parliament to investigate the role the Treasury was induced to play in the campaign, how these specific errors were overlooked.  as well as a range of equally important errors in the second half of the Treasury calculation. I have written to Andrew Tyrie, the Chair of the Treasury Select Committee, asking him to instigate such an inquiry post referendum.”

HMT do not appear to have inspected the actual data for UK trade pre- and post- entering the Common Market. The charts below*4 show that Britain’s trade*5 with the other 10 EU members post 1973 did outstrip its trade with 8 similar developed countries for a while (though this coincided with rapid development of North Sea Oil most of which went to the EU), then grew in line. Even so, the cumulative extra growth with EU member states over 40 years was only 30%, not 76%. 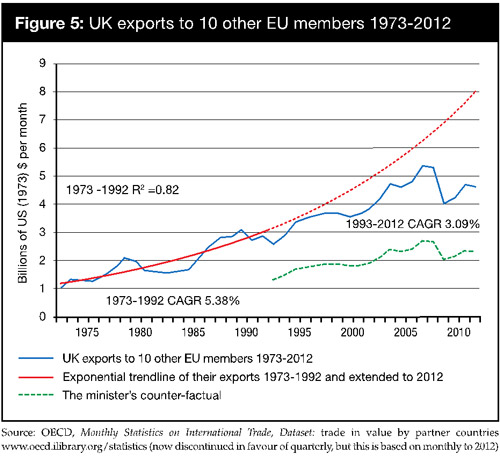 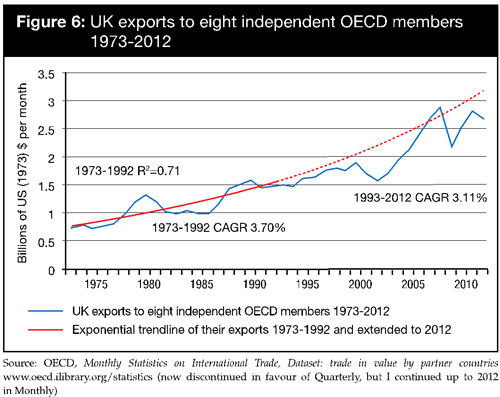 2. Postulated benefits include: the UK could negotiate Free Trade Agreements as Switzerland has done; that we could reduce or remove some or all of our external tariffs as New Zealand has done; we could reduce the burden of EU regulation (as the EU itself is always promising but failing to do); or we could make our regulation more flexible and easily amended if not bound by EU Directives; we could escape Eurozone bailouts; we could reduce the scale of immigration and be more selective on skills etc.; and we could spend the EU net contribution domestically reducing our current account deficit, boosting our GDP and improving public services. The HMT assumes none of those would occur! Andrew Lilico 18/04/2016 www.andrewlilico.com

3.The Treasury assumes that the UK would maintain the same level of tariffs as currently exist around the whole EU. Economists for Brexit and others have suggested the UK should at least remove those tariffs that apply to goods the UK does not produce and eventually move to completely free trade.

4.Charts taken from Myth and Paradox of the Single Market by Michael Burrage, Civitas 2016.

5. The charts, which were the only ones readily to hand, show UK exports whereas HMT is analysing trade i.e. the sum of exports plus imports.