There were strong swings towards leaving the EU after Peter Lilley debated with Remain campaigners before audiences of business people in Letchworth and students at the University of Hertfordshire. The student debate saw a particularly dramatic swing: initially 75% of the audience favoured staying in the EU, and by the end of the evening, 55% wanted to leave.

At the University of Hertfordshire Students’ Union event, Peter debated alongside David Campbell Bannerman, Conservative MEP for the East of England. Putting forward the case for Remain were Alex Mayer, a Labour activist and part of the Britain Stronger In Europe campaign, and Richard Brooks, Vice President for Union Development at the National Union of Students.

Peter said: “There is an enormous and growing interest in this referendum. People are hungry to hear the arguments for and against leaving the EU. The media campaign is dominated by the Remain campaign’s ‘Project Fear’, but once people hear the positive case – that Britain should take back control of our laws, our money, and our borders – they swing in favour of leaving.

“David and I emphasised that Britain could prosper best if we take a global outlook, which we cannot do from within the EU. That would include a fairer immigration system. The current immigration system is racist and unfair: Anyone with EU citizenship can come to this country and live here for ever, yet my ethnic minority constituents struggle to get visas for family members wanting to come over to attend a wedding.”

A poll after the debate at the Biz4Biz Club in Letchworth last week showed the Leave campaign 30% ahead, where before the debate the two sides had been virtually neck and neck. Peter was debating against Sir Oliver Heald QC MP.

Peter said: “Whether or not we should remain in the European Union is an important question for small businesses, who have to contend with an enormous amount of red tape imposed on them by Brussels. A lot of people are still undecided, so it is important to continue to put over the positive case for taking back control over our laws, money and borders.” 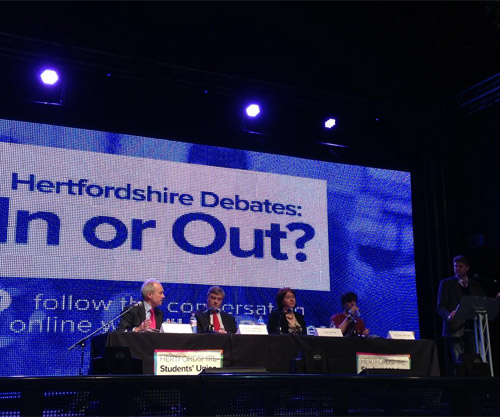